< Back
Home > News & Events > General > A record of which to be proud, Lymm stats for 11 seasons at National Level 5

A record of which to be proud, Lymm stats for 11 seasons at National Level 5

With the RFU’s league reorganisation taking effect from the start of next season, it seems like a good time to reflect on Lymm’s performance over the past 12 years (11 seasons due to Covid) competing at National Level 5.

By way of background, the 4 higher levels, including the fully professional Premiership, comprise 72 teams.  Level 5 comprises 4 regional leagues (North, Midlands, South West and London & South East) of 14 teams each – so 56 in total.  Hence, effectively, Level 5 constitutes the teams ranked 73 to 128 in the country.

Lymm competed in the North Division for 10 of these 11 seasons, being required to relocate to the Midlands for the 2013/14 season.  Over these 11 seasons only Lymm and Rossendale in the whole country have consistently competed at this level, with all other clubs having spent at least one season at higher or lower levels – to be fair to Rossendale, their participation at this level extends for one season more than Lymm, having achieved promotion a year earlier.  What this does mean is that Lymm v Rossendale is almost certainly the most played fixture at Level 5 since September 2010 – more on this later.

With the aid of Jordan Widdrington, Peter Cornelia, the Warrington Guardian archive, the RFU’s result system and as many past match reports as could be tracked down, we have pulled together an almost complete record of Lymm’s league performances, results, scorers, and players over these 11 seasons – almost complete as we are missing 11 players and 8 try scorers from some of the earlier matches.  Set out below are some of the statistics that flow from this analysis. 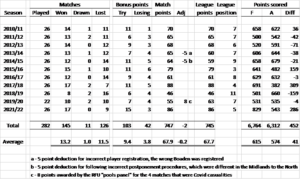 Over these 11 seasons, Lymm has played against 58 different clubs ranging from Alnwick in the North to Bedford Athletic in the South; and from Hull in the East to Birkenhead Park in the West.  Longest trips have been to Alnwick, Morpeth, Percy Park, South Shields Westoe, Blaydon and Bedford Athletic whilst the most local derbies have been against Altrincham Kersal, Sale, Wilmslow, Northwich, Burnage and Stockport.

Other than Rossendale (20 matches) the most played fixtures have been Billingham (18), Sandal (18), Wirral (14) and Waterloo (12), whereas the least played fixture was Carlisle – with only one fixture in the 2019/20 season being completed due to the away fixture being a Covid casualty.

In fulfilling theses 282 fixtures, Lymm have travelled almost 20,400 miles – pretty much the same as going to Adelaide and back!  Indeed, 9 return visits to Billingham alone put almost 2,400 miles on the clock.

The table below shows how the 6,764 points scored over the 11 seasons break down: 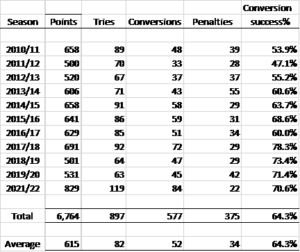 As can be seen the 2021/22 season is notable for delivering the highest try count (27 more than the next best) and the lowest penalty count (only 40% of the highest achieved in 2013/14).  Conversion success rate has generally improved over the period too.

The players with the most appearances are: 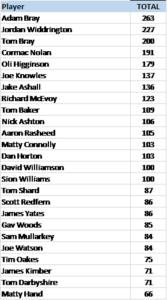 17 players have played just one match.

Lymm prides itself on the number of senior players who have progressed through the ranks of its mini, junior and colts rugby.  Of the 161 players referenced above, 99 (or 61%) are “homegrown”, with these players accounting for 77% (3,900) of all appearances – suggesting that, on average, over this 11-season period Lymm’s match day 18 has included c14 homegrown players.

Inevitably, the kickers lead the way in terms of overall points scored – albeit, as the following table which lists the players scoring 100 points or more shows, it is Cormac Nolan first and daylight second! 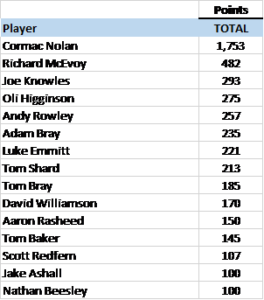 Lymm players have exceeded 20 points in a match on 19 different occasions.  Cormac has done this 14 times, Rich 3 times and Andy Rowley and Joe Knowles once each.  The most points scored by one player in a single match was 29, which Cormac achieved in the 2016/17 home match against Doncaster Phoenix.

The list of players who have scored 10 or more tries is: 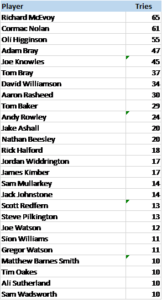 No Lymm player scored 4 tries in a match, but there have been 18 hat-tricks registered by 15 different players – Cormac Nolan, Dave Williamson and Nathan Beesley claiming 2 each. Most of these, as would be expected, were by backs albeit 4 forwards – Adam Bray, Sam Mullarkey, Aaron Rasheed and Josh Hadland – made the list.  The first hat-trick was scored by Andy Rowley in the home fixture against Sandal in 2010/11; whilst the most recent was in 2021/22 when Scott Redfern dotted down three times – also against Sandal at home.  The 2021/22 season was the most prolific with 4 hat-tricks scored by Gregor Watson, Ste Pilkington, Sam Wadsworth and Scott Redfern.