At the end of what had been a very sad week on the news of the passing of past President Lionel Cockayne, on Saturday Lymm welcomed second-placed Preston Grasshoppers to Crouchley Lane. With the reverse fixture earlier in the season having resulted in a 66-14 defeat, there was certainly much more than league points at stake for the home side.

Once again, the Lymm coaching team shuffled the deck resulting in 6 changes to the starting XV, with welcome returns for Gav Woods, Adam Bray, Ed Morris, Tom Shard and Rory Riddell and a Lymm league debut for Cal Morris. There was also yet another centre partnership with winger Nathan Beesley paired with fly-half Scott Redfern. 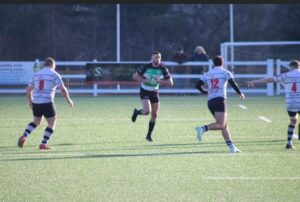 As the 3:00 kick off time approached, strange things started to happen.  The heavy rain that had been falling all day stopped, the wind relented, the clouds cleared, and sunglasses rather than umbrellas became the must-have spectator accessory – I’m sure I wasn’t the only one who thought that Lionel must have been looking down on us!

After a minute’s silence, Preston kicked off and, as quick as you like, Lymm had a golden chance to open the scoring.  Gregor Watson’s returning box kick held up slightly in the wind, causing the Hoppers’ full back to misjudge his attempted catch; the ball bounced, Aaron Rashed gathered and made excellent yards well into Preston territory; the recycled ball was then moved through hands to the left where Cormac Nolan broke the Hoppers defensive line; but with the last defender to beat his pass to speedster Beesley didn’t quite go to hand and the chance was gone.  A breathless start, which set the tone for the whole 80 minutes. 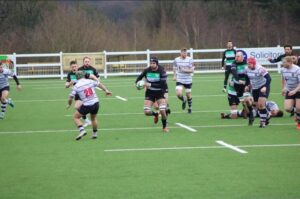 After 10 minutes though, Lymm did start the scoreboard moving, scoring a try, unusually these days, from first-phase possession. From a scrum on the right about 10m inside Preston territory, Lymm moved the ball left where Beesley, making a half break, fed his supporting full-back Nolan who, dummying to his winger Riddell, ghosted through to score under the posts, then making the simple conversion.  7-0 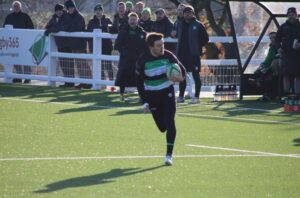 However, this lead didn’t last long as Preston, having kicked a penalty to the corner, constructed a powerful rolling maul from the subsequent line out, that proved unstoppable, to register a converted try.  This was to become a theme for the afternoon.  7-7

On 28 minutes, Hoppers, having previously elected to kick every penalty to touch to utilise their potent rolling maul, changed tack and elected to take the points on offer to get their noses in front.  This lead was even shorter as, Cal Morris, climbed high to gather the restart before feeding back rowers Oli Higginson and Harry Martin who took play into their opponents’ 22.  The recycled ball was taken on through a series of strong drives to within 10m of the try line when Hoppers offended, giving Nolan the simplest of kicks to re-establish parity.  10-10

As the half was heading to its conclusion, Lymm scored their second, excellent try.  With Preston in possession near their 40m line, Lymm managed to steal the ball, then moving it swiftly into the left hand 5m channel where Nolan and Higginson combined to send the Lymm Number 8 galloping in to score by the posts, making for an easy conversion.  17-10

After 45 minutes, Preston were in front with Lymm having barely touched the ball since the restart.  Once again, the rolling maul provided the foundation, which despite Lymm’s frantic defensive efforts, created a formidable platform allowing one of their forwards to exploit the opportunity to score by the posts.  17-24

However, straight back came Lymm!  This time it was Lymm’s turn to put a penalty right into the corner.  From the resultant line-out when Hoppers were, perhaps, expecting to defend a rolling maul, Lymm executed a perfect front peel with Higginson dummying to the supporting Adam Bray to score his second try of the match.  Nolan then succeeded with the difficult conversion to level things up again.  24-24 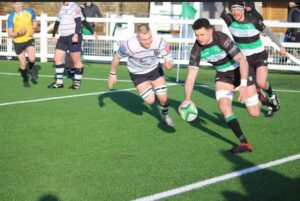 Olly Higginson touches down for his 2nd try

Now Preston elected to use their scrum, rather than line-out as the platform for their next attack, resulting in their Number 8 picking up to cross the whitewash, about 15m in from the right-hand touchline.  The conversion was a first for most people watching as the ball appeared to land on the top of the right-hand upright before seemingly dribbling down the post, adding 2 extra points to the satisfaction of the officials.  24-31.

At the 60-minute mark the feeling of déjà-vu was palpable – penalty, kick to the corner, rolling maul, try – although, on this occasion, the conversion was missed, it did allow Hoppers to put some clear water between them and their spirited opponents.  But Lymm were far from done.  Preston returned the restart, but Cal Morris was tackled high as he caught the ball, resulting in a yellow card for the Hoppers fly-half and a Lymm penalty.  Lymm now gave Preston a taste of their own medicine – kick to the corner, catch, drive and a try for Matty Hand the outcome.  Try bonus point secured, but, this time, Nolan was unable to oblige with the conversion – so it was back to a 7-point match.  29-36.

Back came Hoppers exerting more pressure in the Lymm 22 through their forward strength, using this platform to suck in the Lymm defenders before putting in a cross kick to the right wing where the wicked bounce of the ball eluded Nolan allowing the Preston wing to score their 6th and final try.  The conversion was missed.  29-41.

With 5 minutes left on the clock, Lymm upped their efforts to register another score and secure a losing bonus point.  With the game now being largely contested in the Preston 22, Lymm scored their final and 5th try with the last play of the match.  Another outstanding score which showcased their ambition and pace – this time with the backrow duo of Higginson and Martin appearing on the right flank, with Higginson giving the final pass to his younger partner who scooted in at the corner from 20m.  Nolan then converted from the touchline to bring his individual tally to 16 points and the match to its conclusion. 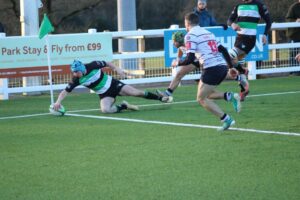 After the match Director of Rugby, Adam Fletcher, commented:

“Although the score line wouldn’t suggest it, I thought we defended really well throughout.  Unfortunately, Preston had a very strong and efficient driving maul that we struggled to contain.

‘In attack, I loved our ambition. We moved the ball really well and created some excellent attacking positions.  I’m relatively happy to come away with 2 points from the match but I do think we did have opportunities to have taken the full 5 points.

‘The boys are looking forward to a well-deserved weekend off, and we should have a healthier squad to pick from for the away game at Macclesfield on 5th March.”

Many thanks to our Referee: Mr Adam Robson – RFU North Panel

Other Games: The 2nd and Eagles 3rd team games were postponed until next Saturday, 26th February. Lymm 2nd team away to Preston Grasshoppers 2nd XV and Lymm Eagles 3rd XV away to Heaton Moor 2nd XV.