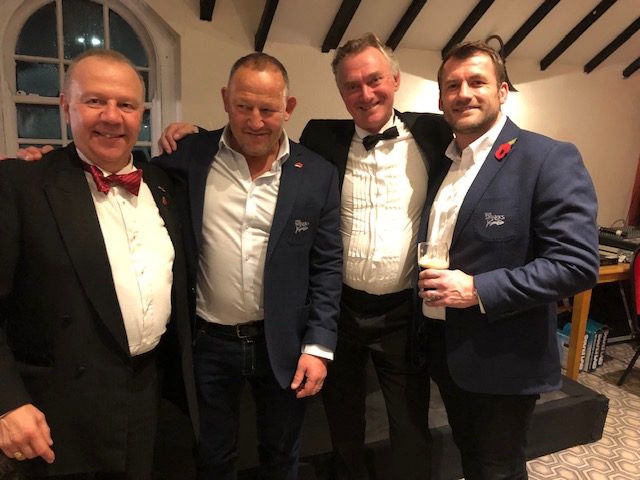 The Sale Sharks duo interviewed by David Linton,  spoke on a wide range of rugby topics.

Mark Cueto believed the 2019 Rugby World Cup should be viewed as a big success with engagement with the Japanese population being a key factor. He also  reflected on his own experiences of the 2007 World Cup in relation to the side of 2019.

Both Steve and Mark commented on positively on Eddie Jones performance, as England Coach and believed he should be given a 4 year contract now.

However the subject matter got someone overlooked, as Dimes challenged Cueto, as a newcomer to the club, to honour the Lymm Rugby tradition and join him for a pint on the beam!

The two from Sale Sharks  were joined by Lymm M&J protégé Ewan Murphy, now at Sale Academy and recently selected for England Under 18’s training camp.

Ewan also spoke about the step up from school / club rugby to Sale Sharks and International training where speed of thought increases significantly.

In discussing the economics of running a Premiership team and balancing the books, Steve warned that rugby in general need to cuts it’s cloth against sustainable income streams. Rugby televised on terrestrial television would also reach a wider audience and is a positive step. He was  also quite forthright in his views that from National League 2 downwards rugby should be an amateur sport, which was loudly applauded by the audience.

In talking about Lymm, he applauded the development of the clubs facilities, its core values and ethos but also warned about erecting a new soulless shell of a clubhouse and advocated retaining the character and tradition of Beechwood – a very topical subject and occupying the minds of members as to the way forward  for Lymm RFC.

Our thanks to our sponsors at the event, John Fletcher from Gallagher and Michael Lough from Bluewren who were introduced to the audience. David Linton encouraged the audience with businesses,  to seek both of them out for insurance quotes and assistance with Digital Technology respectively.

A combination of Ticket Sales, Auction, Raffles tickets and Bar takings generated a gross income of £5964

After the Panto Season, the next big club event is on 14th December, combining a Christmas and Rick Condos leaving Party. Music by local band Shakermaker and DJ Rick C

Tickets are £10 and will soon be available to book online www.lymmrugby.co.uk