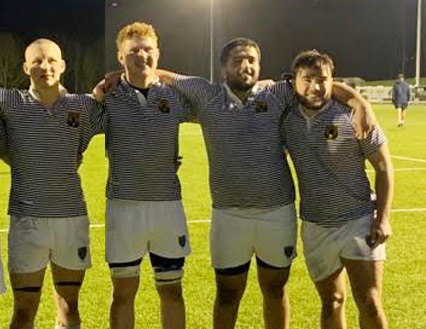 Following a successful match representing Cheshire, and beating Northumberland 31-22, four Lymm Colts have been selected for the North of England Colts Development squad.

The Lymm Colts Academy attracts many young players from throughout the region, with players coming from over 30 local schools, as well as through the age groups of Lymm’s vibrant Mini and Junior section.

‘We took a very dynamic approach to our training by setting up the Lymm Colts Academy for the under 18, 17 and 16 age groups over five years ago,’ commented Will Hind, Chairman of the Mini, Junior and Colts Division.

‘We believe this gives players the opportunity of enjoying rugby, having fun and retaining them through to adult rugby. The Academy coaches players in the Lymm style of rugby, exposing them to the senior coaching team and gives them a real sense of belonging and being part of a special rugby club,’ added Hind.

Lymm Rugby Club President Neil Kelly commented: ‘I am delighted for these young lads from Lymm, it is a huge honour to be selected for the North of England squad and I congratulate each of them. It is testament to their ability and determination, as well as the quality coaching they receive from a very early age at Lymm.

‘We are very proud of the Lymm Colts Academy, which continues to produce such excellent rugby players,’ concluded Kelly.

The Beechwood Briefing
It’s all about the Rugby – or is it?