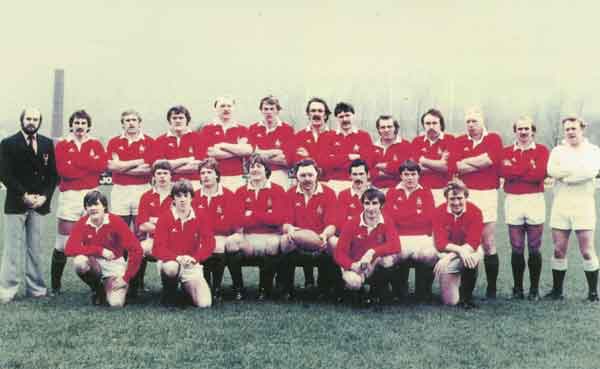 Forty years ago this month an English provincial side produced one of the great rugby union performances of all time when they humbled a Test quality New Zealand team.

Played at Otley on a wet, windy, Yorkshire day, our very own Tony Wright, who had only joined Sale that season, was in the North side that day.

Here’s what Wrighty has to say about his own recollections:

‘I joined Sale that season and had played more games for Lancashire than I had for Sale at that stage!!

‘I don’t think I realised the importance of the game until just before the kick off.  For example, I was changing next to Fran Cotton and he asked which I would prefer, to win today or win the County Championship, which then was  second only to International games.  I answered “the County Championship”. “Wrong answer” came back the reply. Of course I quickly corrected myself.

‘It was only just before the kick off that I realised what the game meant.  The team was in a huddle as the All Blacks were doing their Haka (a poor imitation of today’s fiery haka) and I then appreciated just what it meant to everybody and what a privileged and lucky position I was in with these great players around me and the excited crowd ready to cheers us on.

‘With regard to the game itself, I never felt that we were going to lose.  We always seemed to be on top and the All Blacks never really got any momentum as we pressurised them throughout the game.  At half time, having played into a strong gale and leading 7 -0 we just had to make sure we stuck to our game plan and make sure that we didn’t expect the wind to do the job for us.  My highlight was making the half break and then feeding the unstoppable Tony Bond for his second try.

‘As you can imagine, the euphoria in the changing room after the game was unbelievable.  We had just beaten the best team in the world, so I suppose we could say we were World Champions for a day at least!!

‘At the post match reception, most of the All Blacks as you would expect, were in a subdued mood.  Only winger Stuart Wilson was chatty and friendly.  To cap a great day, I ended up with the All Blacks captain Graham Mourie’s All Blacks tie, which I have still got!

‘They went on to beat England the week after and therefore we were the only team to beat them on that tour,’ concluded Wrighty.

If you wish to watch the match in full please click on this link. How the game has changed but the ferocity is still there:

And here is an article which was written back in 2000 which also recalls some key memories from the players.