Sadly we must report the recent death of Roger Wilkinson. Roger will be best known by players and members from the 1960s to early 70s era. A popular clubman, he loved the club and was always great company around the bar. One of the pioneering members of the club during the 1960’s, he joined with his brother Rex in 1961/62 and went on to be a great stalwart both on and off the field. He played prop for the 1st XV and 2nd XV’s, winning the Best Forward award in 1962 and also served on the committee as assistant treasurer for a number of years. Lymm is famous for its annual pantomimes and he was one of the few remaining cast from the first Panto in 1968, ‘Off White & The Blue Dwarfs’, as one of 7 rather large dwarfs. He was also proud to declare that he was one of the party of 30 that went on the 1968, infamous tour to Berlin. But ‘What goes on, on tour, stays on tour’ 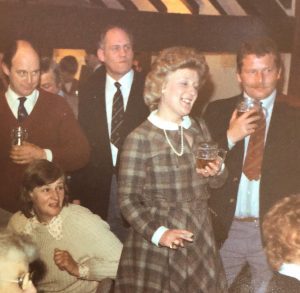 His dad Frank followed his career at Lymm and made it a family affair by joining the club committee, eventually becoming Chairman and then Honorary President. 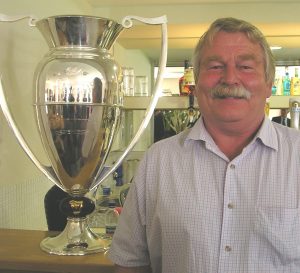 Roger married Sue in the early 70’s and moved to Heaton Moor, joining Heaton Moor Rugby Club, where he quickly established himself as a 1st team player and like at Lymm, became a stalwart of his new club both on and off the park. Rest in Peace Roger you’ll be missed by your many friends in both clubs.

Our thoughts and sympathies are with Sue, daughter Kate and son Chris and the rest of his family at this time. They have kindly given the following details of the funeral arrangements for those who wish to attend.

His funeral will take place on Thursday 27th August at 2pm at St. Paul’s Church, Heaton Moor, Stockport. Due to cover restrictions, only 29 of Dad’s family and close friends will be permitted to be inside the church but anyone who wishes is welcome to be in the church grounds outside during the service. Fortunately, we have managed to arrange for an outdoor (rain covered) gathering for unrestricted numbers to take place at The Heatons Sports Club, Heaton Mersey, where there will be a toast and memories of Dad shared at 4pm once immediate family return from the crematorium.
Do please pass on this information to anyone who you think may remember Dad and let them know they are very welcome to attend the funeral next week.