Lymm travelled to the Yorkshire Dales for their encounter on Saturday, much relieved that the recent flooding on the east side of the Pennines had not extended to the picturesque town of Ilkley, situated on the River Wharfe.  Indeed, on arrival the pitch looked in surprisingly good condition, promising an entertaining afternoon’s rugby unlikely to be impacted to any great degree by the weather or pitch condition.

As has been the case in recent weeks, Lymm’s starting XV showed a number of changes from the previous match with the absent Mawdsley, Yates and Redfern being replaced respectively by Matty Hand, moved up from the bench, Will Baldwin, promoted from the 2nd XV after a number of strong performances, and Tom Bray, who was especially welcomed back after a number of weeks out injured.  Lymm, raising some eyebrows amongst the travelling support, elected to go with three forward substitutes – Nick Ashton replacing Hand, and Matty Connelly in for George Norman being added to Cash Chilvers.

The early exchanges were expectedly cagey with neither team capitalising on possession and the match being mainly played between the 22s.  When either team looked like threatening the opposition red zone, either possession was lost or a penalty conceded to diffuse the threat.  Then on 10 minutes Lymm were awarded a penalty 15m out which Cormac Nolan dutifully despatched between the posts for the opening score. 0-3

On 15 minutes, Ilkley opened their account with a try in the left hand corner.  Having declined a kickable penalty in favour of a kick to the corner, the Dalesmen pounded the Lymm defensive line and then moved the ball to the left where their left winger was able to force his way over the line.  The conversion was missed.  5-3.

After 30 minutes, Lymm lost scrum-half Tom Shard to a serious looking shoulder injury and, given the absence of a back on the bench, had to implement a relatively complex reorganisation which brought Connelly into the back row, with Ollie Higginson moving into the centre, Ben Stansfield to the right wing, Nathan Beesley to fullback with Nolan stepping into the unaccustomed scrum-half birth.

On 35 minutes. Lymm’s plans were further impacted as they were reduced to 14 men when Gav Woods was shown a “team card” and required to sit out the next 10 minutes.  Ilkley dutifully converted the resultant penalty to draw further ahead.  8-3

With the half drawing to a close Lymm, following a sustained period of attack in Ilkley’s 22, were awarded a kickable penalty 22m out.  Nolan calmly bisected the posts and the teams trotted off to the changing rooms for half-time with little between them on the scoreboard.

The early second half exchanges were all Lymm, as they added width to their attack bringing their potentially match-winning back three much more into the game.  Higginson was also proving a handful for the Ilkley defenders with some powerful bursts through the centre.  Whilst the Ilkley defence held firm, they were reduced to 14 men on 45 minutes for a high tackle on Higginson, allowing Nolan to nudge Lymm back into the lead.  8-9

On about 55 minutes Lymm registered their first try of the afternoon.  Patient build up work with Higginson and the Brays to the fore, then linked with second rowers Rasheed and Baldwin who both make good yards towards the Ilkley try line, before Nolan took the final pass, cleverly wrong-footing the covering defence by darting “against the grain” and sneaking over just to the left of the posts.  He duly added the extras to extend his monopoly of the scoresheet.  8-16

5 minutes later Lymm scored their second try.  This was an outstanding team effort finished off with some great skills by Beesley.  Having stretched Ilkley by moving the ball across the width of the pitch and back, James Kimber spotted some space behind the advancing Ilkley defensive line.  His smart grubber kick pulled up just short of the right hand touch allowing the speedy Beesley to show his footballing skills by sending the ball across the Ilkley try line before outpacing the defenders to touch down.  Faced with his most difficult kick of the afternoon, Nolan then calmly added the extras.  8-23

On 67 minutes, Lymm scored their third try.  Ilkley had been enjoying a period in the Lymm 22 and were within inches of registering their second try.  But the Lymm defence was solid, pushing the Dalesmen back towards the 22 before Woods secured a turnover.  The relieving kick sent the ball deep into the Ilkley half before their fullback returned the favour with a steepling kick back into Lymm’s territory.  Hand calmly collected the ball under considerable pressure before embarking on a run down the left channel.  Having made good yards he intelligently drew the final defender before dropping a pass straight into the arms of speedster Joe Senior who cantered in from 35m.  Nolan then added further to his personal tally for the afternoon.  8-30

Lymm hopes were now high of securing a 4th bonus point try.  However, Ilkley were not yet finished and on 78 minutes their fly half scored a well-worked try, showing considerable individual skill in the process, then adding the extras. 15-30

With the clock at full time, Lymm were awarded a penalty for obstruction and Ilkley were once again reduced to 14.  Sensing the opportunity, the penalty was put into the corner for a final attacking line-out 5m from the Ilkley try line.  From the throw, James Lewis forced his way over the line but Lymm’s joy was short-lived as the referee had spotted an infringement in the build-up.  He then blew for full time.

A reflective Coach Fletcher was in a suitably up-beat mood, commenting “I’m really happy with the win but even happier about how we played in the second half.  Our defence and energy were outstanding and we were clinical.  The only downside is the injury to Tom Shard, who is still in hospital after having his shoulder put back in place.”

Lymm remain in 6th place in the League and next Saturday are at home to 8th placed Kirkby Lonsdale, KO 3pm. 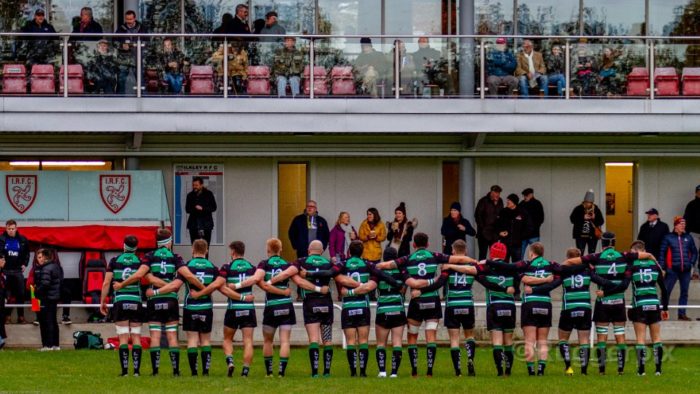