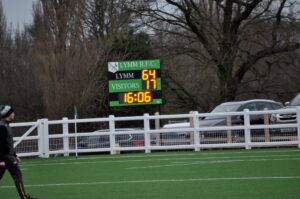 In his pre-match briefing the Lymm president made reference to the expected reorganisation of the leagues from next season, the upshot of which meant that today’s game with our friends and rivals from over the Pennines – a level 5 league fixture that extends back to our first encounter during the 2010 / 11 season, may be our last meeting for some considerable time and as such we wish our friends from Sandal a fond ‘au revoir’.

And being a sad statto, I can report that before today’s game the results of the previous meetings had been nine wins for Lymm and eight wins for Sandal [including their win in the corresponding fixture earlier this season].  So would honours become even after this ‘final’ encounter?

So, to the game.  Played, initially, under a sunny sky, though with a constant cool breeze running the length of the pitch.  And for the first time this season with the electronic scoreboard displaying the correct time of day!

Anybody arriving late would have missed what happened next.  From the kick off, Sandal retained possession, a pass, another pass, and then an interception by Lymm’s number 15 – Cormac Nolan.  Clean through and under the sticks.  Conversion added by said Nolan.  Score:  Lymm 7 – Sandal 0.   No more than 2 minutes on the clock.

From the restart, the ball was cleanly taken by Lymm’s second rower James Yates, then some slick passing along the backline and into the hands of Ste Pilkington, to break through a tackle and cross the line.  Try.  Conversion added by Nolan.   Score:  Lymm 14 – Sandal 0.  And still less than four minutes played! Soon a penalty to Lymm.  Kicked into the Sandal 22m for an attacking lineout. And then a period of sustained pressure by Lymm within the Sandal defensive zone, only fragmented by some lost possession in the collision areas and some stout defence by Sandal.  On one occasion Lymm having possession a mere 2m from the try line, only for a penalty for not releasing negating their advance.  The reliving kick though thwarted by the strength of the breeze against Sandal.

Another drive deep into the Sandal red-zone, only to be held-up over the line.  Then on 17minutes, a following another attacking lineout, there was some a superbly executed interplay loop movement performed by the midfield, resulting with a try for Scott Redfern under the posts.  Conversion added by Nolan.   Score:  Lymm 21 – Sandal 0. 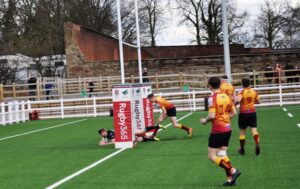 Scott Redfern scores the 1st of his 3 tries

At this point it looked like one-way traffic, however the breeze was a major factor in preventing Sandal in breaking out of their half.  So when on about 25minutes, it was no surprise that once Sandal got into the Lymm half, they were, with some fine mauling and ball retention by their pack [and with their Captain Thompson providing a formidable site with his bulldozing rampages with ball in hand], and then their centre Jake Adams was able to slip a tackle and score.   Unfortunately for Sandal, his attempted conversion was missed.  Score:  Lymm 21 – Sandal 5.

This surely gave the home team the knowledge that this was to be a good encounter, as Sandal have always been challenging opponents – when able to demonstrate their talents. 27minutes have passed, and so has the sunshine.  To be replaced by cloud and the wind persisting in its strength and direction.  Thus Lymm where able to gain more possession within the Sandal half, and following a strong drive on 32minutes by the Lymm No 8 – Oli Higginson, and a neat pass to Redfern, a try and bonus point was attained.  Conversion added by Nolan.   Score:  Lymm 28 – Sandal 5. 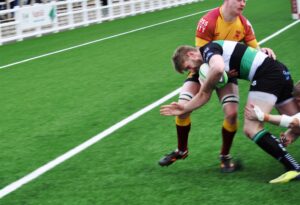 Scott Redfern on the way for his 2nd tray

Back came Sandal with some continued possession of their own in the Lymm half, only for it to be supressed by some fine defensive work, and once Lymm had been awarded another penalty, the kick put Sandal back into their own half.  Another Lymm attack held-up over the line, and so a drop out again.  Then on 40minutes a Sandal kick was collected by Nathan ‘whippet’ Beesley, who kicked through into the Sandal 22m, where a slight fumble by the Sandal defence saw the ball roll into the goal area, where the supporting Nolan was able to ‘dot the ball down’ for a simple try.  From out wide his conversion hit the post.   Score:  Lymm 33 – Sandal 5.

In injury time at the end of the half, Sandal had another foray into the Lymm Half.  Good forward interplay following a break by their second rower Jonny Garrity and supported by hooker Gibson saw them score their second try, again by their centre Jake Adams.  Alas his conversion was again unsuccessful.  Score:  Lymm 33 – Sandal 10. Then it was half time. And a chance for a much appreciated hot coffee at the ‘halfway house’.

The second half, and this time it would be Sandal with the wind at their backs, and for Lymm to decide how to deal with it. Well one straight forward approach is to deny your opponents possession and to keep your defence intact.  Thus from the restart a pattern emerged whereby Lymm had good possession in the Sandal half, with strong runs and line breaks from both Higginson and Pilkington.  The only drawback was conceding penalties whereby Sandal could relieve the pressure.

On 45minutes a searing run down the left wing by Joe Senior was stopped by a tackle in the corner.  A try, a spectacular try screamed the Lymm cognoscenti, nay sayeth the man with the maroon and yellow flag – foot in touch.  Ok then, defensive lineout for Sandal – knock on by them. Lymm scrum five metres from the line, and what a scrum…Sandal driven over their line and a try for Higginson.  Conversion missed. Score:  Lymm 38 – Sandal 10. 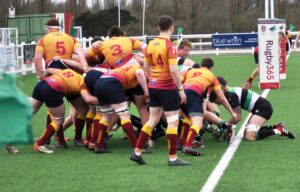 No.8 Olly Higginson touches down

It must be said that against a bigger pack, the Lymm set scrum was rock solid all through the match. They have been working hard on their technique, under the watchful eye of forward coach, Curtis Langdon over the last few weeks. This has transformed our scrummage, which first became evident against Macclesfield last week.

Then a short period of play in the middle third of the pitch, with both sides having and then loosing possession, then a pass by a Sandal player was intercepted on about the half way by Rob Makin.  He sped toward the Sandal line, 40metres to go, then 30, then 20, and then…..the batteries in this finely tuned athlete ran dry, or was it the strength of the breeze in his face or the price of gas.  However, help was on hand, in the guise of the young rampaging Aaron Rasheed, who collected the pass to score.  Though, another missed conversion.  Score:  Lymm 43 – Sandal 10. 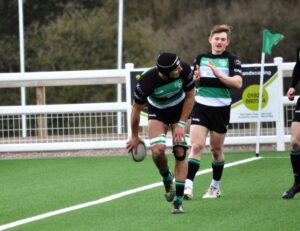 So two tries within twelve minutes of the restart. Then on 54minutes, following another break by Pilkington there was Beesley in support to score. This time the conversion by Nolan was good.   Score:  Lymm 50 – Sandal 10. 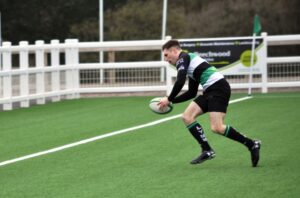 This was followed swiftly on 58minutes, with another interception by the interceptor-in-chief Redfern.  His third try of the game, and thus a visit to the ‘beam’ to look forward to!  Another Nolan conversion.  Score:  Lymm 57 – Sandal 10. 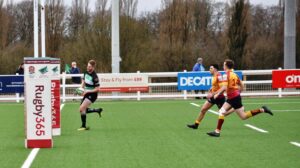 There then followed a lengthy period where both teams had spells of possession, but good defence by both sides frustrated many a promising attack.  Given the score line, Sandal could be forgiven if their heads dropped.  But that was not the case, and through a spirit of determination and to show what they are capable of they continued to make inroads into the Lymm half.  Again there were some line breaks by their fearsome pack, and some fine handling by their backs.  Lymm had to work hard to stop them.  Then on about 70minutes, another interception, only this one was by Sandal that allowed the other member of the Adams family – Luke Adams, to score near the posts.  His brother Jake duly obliged with the conversion.  Score:  Lymm 57 – Sandal 17.

And so it continued, with both sides having moments to relish, with the game going from one end to the other.  Sandal had their breaks, as did Lymm through James Yates, Rasheed and a drive by captain Gavin Woods.  There were even two more interceptions, but neither provided any points, as defences were strong by both teams. It should be noted that the many interceptions seen on the day were down to a willingness by both teams to play open and attacking rugby. There were few instances of tactical kicking. A credit to both teams to entertain and thrill. 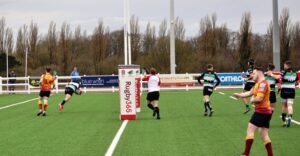 Dalton Frith scores the final try of the game

With the game’s final whistle approaching, it looked like the scoring had finished for the day.  But no, with what was the last move of the game, Lymm had possession in the Sandal half, some slick handling released the young Dalton Frith on his 1stXV debut, to skip down the touch line and then to execute a sublime side-step to score under the sticks for the final try.  What a try!  Of course Nolan converted. And with that the referee blew the final whistle.

Thirteen tries on the day, with ten going to Lymm.  Redfern with his hat trick and 24points for Nolan.  Not a bad day’s outing.

So sadly we must bid adieu to the players and supporters from Sandal, but will look forward with eager optimism and in a spirit of renewed friendship for a potential meeting in the not too distant future.

‘Really happy with the performance’ commented Lymm DoR Adam Fletcher. ‘The boys started so well and took the game away from Sandal in the first 20 minutes. The defence was strong throughout and we always looked sharp in attack.

‘Scotty and Rhys were outstanding and it was great to give a debut to young Dalton, who crowned it with a super try

‘Next week is a well deserved rest week for the 1s but the 2s have a catch up fixture away to Sedgley Park 2s, KO 3pm.’