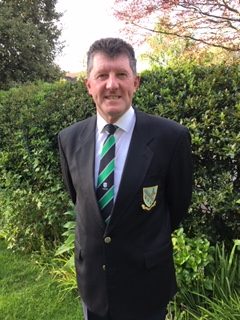 We are pleased to announce that Neil Kelly has accepted the invitation to succeeded David Newton as Honorary Club President for the years 2019 to 2021.

These are important years in the history of our club, as 2020-21 season marks the Diamond Jubilee of the club. The club was founded in 1959 but established as an RFU member club in 1960.

In addition, an exciting development programme is underway to secure the club’s future and establishment for the next half century. A new Artificial Grass Pitch is being laid and will be ready for season 2019-20 and a new clubhouse will be built adjacent to the new pitch, which will hopefully be ready in the next 2/3 years.

Neil has been a member of the club since the 1970’s, playing in the successful Colts team from 1976 to 1979 and as Captain and Cheshire Shield winners for 78/79 season. He then progressed to 1st team hooker for a number of years, being a member of the only ever Cheshire Cup winning side in 1989. He is also a former Club Chairman.

Neil is now retired, following a successful business career. With his wife Sharon, together they will be excellent ambassadors for the club over the next two years.

We wish to thank our retiring President David Newton and his wife Kate for an excellent term of office. We know that they will continue to be very much involved with the activities and exciting development programme at the club.